How Does the Rudder Work? 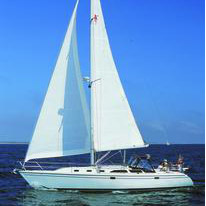 During turns the boat pivots around a point near its midsection—roughly at the mast on a sloop. The stern moves one way, the bow moves the other way, as the boat changes direction. In very close quarters it’s important for the helmsman to remember this, and make allowances for the swinging stern to avoid bumping into other boats, docks, buoys, etc. Most new sailors make this mistake, but rarely more than once. Most smaller sailboats (under 30 feet or so) use a “tiller” to turn the rudder. This is basically a stick made of wood or, sometimes, aluminum, attached to the top of the rudder. The tiller provides leverage to turn the rudder against the pressure of the water moving across it. This pressure can be substantial, so even on a small boat the tiller is usually three or four feet long. Larger boats generally use a wheel, attached to the rudder by cables and a steel “quadrant” to provide sufficient leverage. While steering with a wheel takes less effort, a tiller is better for folks learning to sail, since it provides instant response and feedback: if the sails are trimmed incorrectly, the skilled helmsman will feel it through the tiller. Because of this, some expert racing sailors prefer a tiller, even on large sailboats.