Backing Into A Slip 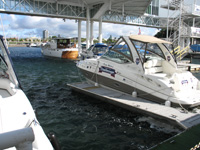 Backing Into A Slip

Your palms are sweaty, your mouth is dry, and you have a knot in your stomach – you must be backing your boat into a slip. Despite the initial anguish of attempting this seemingly difficult task, there are several benefits.

First of all, having your boat stern first in the slip allows easier boarding regardless of your docking situation and the power and water connections are at or near the transom, eliminating the hassle of draping the cables over the rail or along the side deck to the shorepower station. It’s also provides a special social element, allowing you to easily enjoy the camaraderie of other boaters. But with any situation that has many benefits, there is always one inevitable drawback. In this case, it’s moving your vessel from open water into the tight confines of the slip, smoothly and efficiently. Until you get the hang of it, you’ll find this a daunting task. Let’s take it step by step.

First and foremost, check the wind. Even a light breeze can throw you off course. So, look at the water around your boat as the air paints a picture of its direction, strength and gusts. Anticipate what it will do to the movement of your boat. It can be confusing to look at trees or flags nearby since the wind around your vessel may be moving in an entirely different direction.

Before you start to back in, ensure your fenders are adjusted properly on both sides. While you may be landing only on your starboard or port, unexpected wind gusts can potentially throw you off course, causing you to inadvertently land on the other side – or against an adjacent boat. Fenders can take a lot of impact without doing any damage.

After getting into a downwind position (if the wind is from the east, approach the west side of the slip you are backing into), you need to set your angle. You want to approach the dock from approximately 60-degrees.  Think of the dock you’re landing on as a 12:00 o’clock position and make your approach from either 20 minutes to or 20 minutes after the hour.

Then, take aim. To back in, aim the center of your transom at the corner of the dock you’ll be landing on. Now proceed as straight as you can. You want to hold your track without variation, aiming the center of the transom at the dock. If your boat starts to veer to one side or the other, don’t be afraid to adjust the direction, but do it gently. Go slow and make minor adjustments as needed.  Think of driving down a straight highway. You constantly make minor corrections by moving the steering wheel a little bit one way or the other.  It’s the same adjustments in a boat and immediate minor corrections will keep you going straight.

I use what I call “Touch in-Touch out”. Engage the engine only for a second, long enough for a few revolutions of the prop, and then immediately go back to neutral. This will be just enough to modify your direction. If you stay in gear any longer, you’ll start a swing that could throw you right off course.  Speed is not an issue.  The Touch In-Touch Out principle easily allows you to adjust the direction of the vessel by increments, without increasing speed underway and allows you to maintain control.

dock, start to turn gently. In a twin direct-drive, engage the engine that’s closest to the dock. In other words, if you’re landing on the port side of the boat, use the port shifter. In a twin IO, you also engage the engine closer to the dock, but first, turn the wheel slightly away from the dock. This will move the stern toward the slip but away from the dock and the boat will begin moving toward the dock.  You’ll see the direction change.  Wait for it.  Do it again if the boat is not turning enough, but Touch In-Touch Out.  All you are doing is changing the angle to land parallel to the dock. The momentum of the vessel will continue to carry the boat where you want to go. The vessel should come in on its own, since the stern swings away and the bow swings toward the dock, upwind.

Any time you feel that your vessel will not go where you want it to, stop. Pull away from the slip, go back downwind and start again.  But when you’ve done it right, you can stop the vessel’s backward movement, with Touch In-Touch Out in forward. If the stern is farther from dock than the bow, use the shifter closer to the dock.  In an IO, turn slightly away from the dock, before engaging the engine.  Again, wait for the reaction.  If the bow is farther, use the outside shifter.  With IO engines, turn toward the dock slightly then touch forward. When the landing has worked perfection and the vessel is parallel, touch the starboard engine forward and immediately repeat with the port engine, which balances the movement and keeps the boat parallel. After the perfect landing, you or your crew can easily step off your boat – no jumping – and tie up.