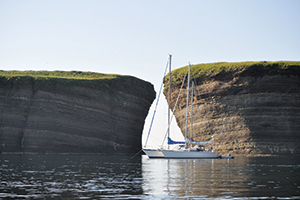 The province of Newfoundland and Labrador is a cruising destination you won't soon forget. A rugged and rocky shoreline punctuated with hundreds of secluded coves, quaint communities with friendly faced locals happy to help with your lines, this is what you will experience when you come to Newfoundland and Labrador; one of the world's prime, but often overlooked, boating destinations. Thrust out into the North Atlantic, the province is home to the most easterly point in North America, and when you visit; you truly experience the phrase "getting away from it all".

Imagine fresh sea breezes untainted by the smell of civilization, majestic icebergs thousands of years old slowly gliding along the coast; ungainly little puffins skipping across the water in a comical, part flying, part running attempt to get out of your way; too full of capelin to fly but still able to duck beneath the waves and swim to safety. These images are common for boaters in Newfoundland and Labrador and we would love to share them with you.

With 17,540 kilometers of coastline and more than 7,000 smaller islands the opportunities for boating are limited only by the short season; spanning four months from June to September. Although you are still able to cruise earlier or later in the year, both you and your boat should be outfitted for temperatures in the single digits and be prepared for more frequent gales, especially in the fall. 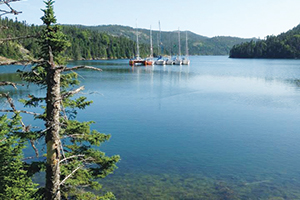 Being the 17th largest island in the world, Newfoundland is large enough to have considerable variations in weather. The west coast and central tend to have warmer temperatures but we still get warm weather in the east too. The typical winds during the summer months are southerly or southwesterly in the 10 to 15 knot range. Gales occur approximately two per cent of the time.

Two major ocean currents converge off the coast of Newfoundland and Labrador, the cold Labrador Current and the warm Gulfstream which, when they meet off the southeast coast, give cause to the famous Newfoundland pea-soup fog. While you can experience fog at any time of the year, weather statistics indicate fog only occurs between 20 and 30 per cent of the time during the summer months. That being said, good radar goes a long way toward extending your cruising time and reducing anxiety. Air temperatures average near 20 degrees in the summer but easterly winds can make it feel considerably cooler especially on the water. Seawater temperatures range between four degrees on the northern coast to over 15 degrees as you get farther south. 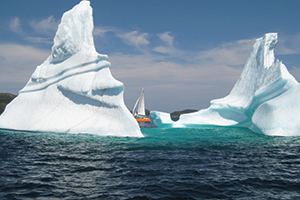 Among many of the unique attractions for the visiting boater are the icebergs that pass along our northeast coast. These majestic bergs are thousands of years old and an awe-inspiring sight to behold, especially from the water. Nowhere else in North America can you get as close to these ancient giants and still be warm and comfortable in shorts and tee shirt. Should you be fortunate enough to see one split apart or roll over, it is a sight you will remember for the rest of your life.

As they melt and break up, there are often small pieces of ice called "bergy bits" that, once clear of the berg, can be easily picked up for your cooler and even better, used for ice in an evening cocktail. Picture yourself in a quiet moonlit anchorage, relaxing after a day exploring the ruins of a resettled community, not another boat within miles and your favorite drink popping and hissing as the thousand year old ice slowly dissolves. This is cruising in Newfoundland and Labrador.

Newfoundland and Labrador is known as the seabird capital of North America with more 35 million seabirds congregating around our coast each year. Our most well-known seabird colony is located at the Cape St. Mary's Ecological Reserve on the southern coast of the Avalon Peninsula. There you will find Bird Rock, a sea stack towering 100 meters and covered with thousands of Murres, Kittiwakes, Gannets and other seabirds. Then there's the Witless Bay Ecological Reserve, the largest puffin colony in the world and the Baccalieu Island Ecological Reserve, home to the largest Leach's storm petrel colony in the world. Birdwatchers will have plenty to look at. 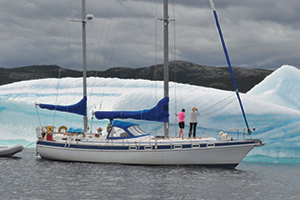 No description of boating in Newfoundland and Labrador would be complete without highlighting the largest creatures in the ocean, whales. Feeding on capelin, krill and squid, 22 species of whales make Newfoundland and Labrador their home every summer. Minke, sperm, orca, pothead, blue and the largest population of humpbacks in the world almost guarantee you will come upon them during your trip. Humpbacks are one of the most common and the most exciting to see as they breach. Watching a humpback over 16 meters long rise vertically out of the water for almost its full length, slowly turn over and gently splash back down is a sight that never ceases to impress all who witness it.

When planning a cruise to Newfoundland and Labrador, there are a number of publications worth checking out. First and foremost are the CHS Sailing Directions, ATL 101, ATL 102, ATL 103 for the island and ATL 120 and ATL 121 for Labrador. The Cruising Club of America publishes two cruising guides for the province, one for the island of Newfoundland and a second for Labrador. For the Notre Dame Bay region, a very good locally produced cruising guide is available in some stores or through online order. There is also a guide by Rob Mills that, while a little outdated, still includes valuable information not found in the other publications. A new source of information helpful for boaters, Coastal Marine Informatics (CMI) has recently become available online. In addition to the material normally contained in a cruising guide, CMI searches a number of websites for the most current information for a local area and presents it in an easy to use format. The concept is being developed in the province and continues to be updated regularly.

Whether you get as far as the south coast and enjoy the beautiful fjord-like bays or have the time to make it around to the northeast coast, you are bound to experience the cruise of a lifetime. There are so many idyllic cruising grounds around the province it's nearly impossible within the bounds of this article, to describe them all. Some general information supplemented with some of the highlights will entice those who are considering a visit to make the leap and come enjoy an unrivalled cruising experience. We would love to see you. 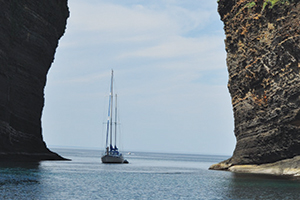