Gold rushes and capitals: boating through history from Lunenburg to the LaHave River 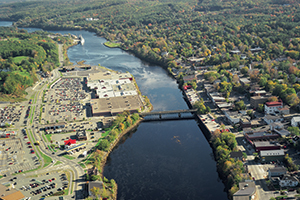 Going by boat from Lunenburg to the LaHave River is a historic journey. Despite a few small well-marked hazards in Lunenburg Bay, Long Shoal and the aptly named Shingles, once you are on the western side, the coastline is clear of obstructions. This allows a good view of what are known as The Ovens, a spectacular series of caves in low cliffs. Now a natural park and tourist attraction, the Ovens were home to more than 1,000 workers after gold was discovered in 1861. Visitors to the park can still pan for gold, but the rush was over in a couple of years and efforts to mine gold were over by the beginning of the 20th century. One of the larger stakeholders was William Cunard, son of Samuel Cunard, and the cove before Ovens Point is named Cunard Cove.

If you decide to make the trip to the LaHave River remember it is ocean with open roadstead harbours until you reach the LaHave so choose your weather wisely. Cross Island is on your port side and Rose Bay opens on your starboard side once past Ovens Point and the landscape becomes stark and beautiful. Next is Rose Point and Kings Bay opens up with the community of Kingsburg settled in 1787. On the western side of Kings Bay is Hell Point followed by Hartling Bay, home of Hirtle Beach, a Nova Scotia Provincial Park. Just one more headland, Gaff Point, and the entrance to the LaHave River is visible, guarded by West Ironbound, Mosher, Spectacle and the LaHave Islands of which George, Bush, Jenkin and Bell Islands are connected with causeways and bridges from the mainland. 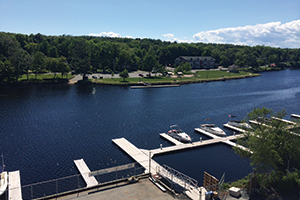 The LaHave River is navigable from the Atlantic for 15 miles to the town of Bridgewater. The three-plus centuries of European settlement on the LaHave River is short compared to the 60 centuries of Mi'kmaq settlement of "Pitjinoiskog". The Europeans arrived with Samuel de Champlain, who is said to have initially mapped and named the river in 1604. Fort Point on the West side of the La Have River where the estuary narrows is where Commander Isaac de Razilly established the capital of New France with his Fort Ste. Marie de Grace at the request of the French King Louis X111. Unfortunately, Commander Razilly died suddenly in 1636 and the capital was moved to Port Royal on the Annapolis River. The Lunenburg County Historical Society operates the Fort Point Museum at this Historic Site. Riverport on the east side of the River was a busy shipbuilding and fishing port in the 19th and 20th centuries and the cable ferry Brady E Himmelman connects the east to the west side of the river.

The LaHave Bakery is a popular spot on the west side of the river where boats may tie up and two miles upstream is the LaHave Yacht Club in Pernettes Cove. Travelling up the river is peaceful and pastoral, although it becomes more populated at Conquerall Bank on the west side and Upper LaHave on the east. The river starts to narrow at Dayspring and navigable water stops in the town of Bridgewater at the first of two bridges. Bridgewater was an industrial port that shipped out lumber in the 19th and 20th centuries and is now the home of tire company Michelin. The town provides service to boaters with a launch ramp for trailer boats and the Bridgewater Marina is located on the east side of the River. 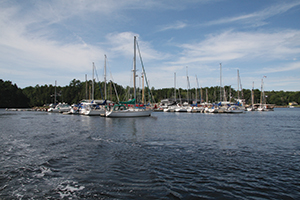